Carlex is a proud member of

What is UV radiation?
Ultraviolet (UV) radiation is a form of electromagnetic radiation that comes from the sun and man-made sources like tanning beds and welding torches.
Radiation is the emission (sending out) of energy from any source. There are many types of radiation, ranging from very high-energy (high-frequency) radiation – like x-rays and gamma rays – to very low-energy (low-frequency) radiation – like radio waves. UV rays are in the middle of this spectrum. They have more energy than visible light, but not as much as x-rays.

But the highest-energy UV rays don’t have enough energy to penetrate deeply into the body, so their main effect is on the skin.

Does UV radiation cause cancer?
Most skin cancers are a result of exposure to the UV rays in sunlight. Both basal cell and squamous cell cancers (the most common types of skin cancer) tend to be found on sun-exposed parts of the body, and their occurrence is typically related to lifetime sun exposure. The risk of melanoma, a more serious but less common type of skin cancer, is also related to sun exposure, although perhaps not as strongly.

What do expert agencies say?
In general, the American Cancer Society does not determine if something causes cancer (that is, if it is a carcinogen), but we do look to other respected organizations for help with this. Based on the available evidence, several expert agencies have evaluated the cancer-causing nature of UV radiation.
The International Agency for Research on Cancer (IARC) is part of the World Health Organization (WHO). One of its major goals is to identify causes of cancer. Based on the available data, IARC has made the following determinations:

The National Toxicology Program (NTP) is formed from parts of several different US government agencies, including the National Institutes of Health (NIH), the Centers for Disease Control and Prevention (CDC), and the Food and Drug Administration (FDA). The NTP has made the following determinations:

Automotive laminated glass is constructed with two pieces of glass and a vinyl interlayer and are used 100% for windshields and now front and rear doors for select models.

All windshields, and some front, rear doors, and roof panels can be laminated, however the most common glass installed in front and rear doors, quarter windows and back windows are tempered,

For all truck and sport utility vehicles, glass that is installed behind the front doors (B pillar) can be dark privacy glass but the same is not true for sedans. See sketches below showing dark glass in typical DUV or light duty truck. Tempered is one layer of toughened glass that shatters into very small pieces so as to avoid any lacerations. There are different
thicknesses and colors of tempered glass and are most commonly used on front, rear doors, quarter windows and rear windows. 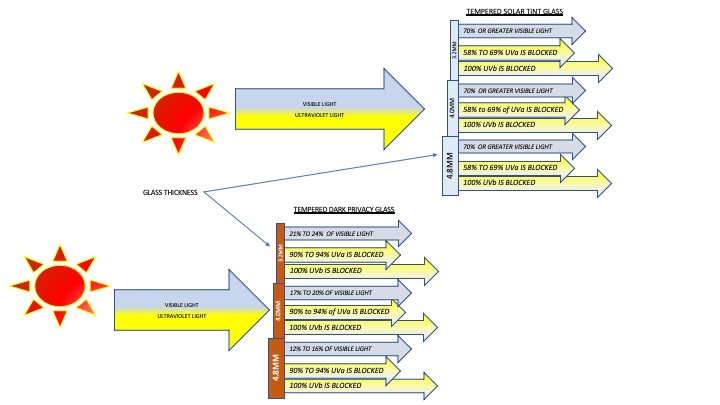 There are many reasons to replace your glass with the original part but this becomes even more important when a camera utilizing any of the features above is included on your vehicle. The original part designed for your vehicle has been approved by the vehicle manufacturer to work with the on-board technologies. Generic or OE-like parts may be similar in design, but because they were reverse engineered (meaning copied in simplest terms), they may vary in some of the following areas:

Upon completion of an installation, the vehicle system may be required to be recalibrated. Read glassBYTEs’ article about recalibrating aftermarket and OE glass.

We want you to have the latest information about changes regarding the products we offer. If there is something you are looking for and not able to locate within our website, please contact us.